We live in a fantasy world, a world of illusion. The great task in life is to find reality- Iris Murdoch

Sea looked calm and the moonlight was flooding the beach… Coconut palms swayed to the sea breeze and night air was becoming cool.  Fishing boats started to come one by one to the beach, silhouetted by the moonlight.  Fishermen appeared from the boats and started to put down the rolled nets bundled with fish… A paradise for a writer to put together a nice piece of writing. What lies behind this breathtaking scenery is the reality of life…

Thinking back to that amazing scenery will never lose its excitement… I remember how I planned that journey and talked in to one of my friends to travel with me…I was on a mission to investigate facts for an article about the impact of the tourism industry on the shoreline fisheries. After the settlement of civil war which went for decades, Sri Lanka was opening up it’s doors to the tourism industry in the eastern shorelines.

Indulging myself with books was a lifelong passion for me. But my hobby to investigate and write as a freelancer for local newspapers opened another perspective of looking at life… As readers, we like to travel in imaginary world’s full of fantasies…  As writers, we like to full fill the fantasies of our readers. There is nothing wrong with it.. but there’s something more to life… There’s a story behind struggling lives of common people too..

The only passion that guides me is for the truth… I look at everything from this point of view. -Che Guevara

Both myself and my friend found ourselves in this beautiful fishing village in an eastern beach in Sri Lanka thanks to my journalism adventures …I remember that night, where I spoke with the fishermen and tasted the fish stew they made on the beach. A calm night on this beautiful beach can hide their difficulties of life. Fishermen take their life as it comes. Not many dreams for future.. not much repent for the past. Life is simple.. but a struggle for survival… A booming tourism industry will create another dimension for their routine of life.

That adrenaline rush when you find the facts… That is the journalism I loved and that is what I liked about investigative writing… You get your say and you are your own “boss” in your piece of writing. While doing so you become the medium for someone out there who likes tell his story otherwise will never get hear… Isn’t that amazing? That is why scholars describe media as one of the pillars in society, which holds it together!

Your writing journey takes twists and turns when you dig into the fine details which lay beyond fantasies. Next day we went to see corals with a local boat operator who showed us some of the pristine undamaged corals I have ever seen. He expressed his fears when mass scale business operations come to this pristine environment and make it a nightmare for this undisturbed corals. What are will the consequences of an unplanned Eco-tourism industry?

Passion for writing and excitements of facts finding… A good set of words and some creative photos… My article became enriched with views and quotes from these coastal dwellers. Those were the stories of real owners of land and resources who spoke their hearts out… Years later hotels started to come up.. Thousands of tourists started to flood in.. Soft drink and fast food culture came with unplanned tourism industries… Litter scattered… Commercialization… Sustainability is the “cover story” of all the unplanned “developments”…

Kailash Kher, an Asian musician inspired by folk and Sufi traditions, always commented that his inspiration came from nature and common people….Some writers and artists become lucky in their lives to get that inspiration …As a journalist once I was lucky to be in that village and at that moment…lucky to see the moonlight flooding to the sea in that beautiful fishing village.. lucky to be the voice of common people of that distant village… But I am not lucky to witness those beautiful beaches become unplanned business ventures on a later day… Is that the life’s reality?

P.S.- Above post is #4 of my “Memoirs from An Accidental Journalist” blog series… 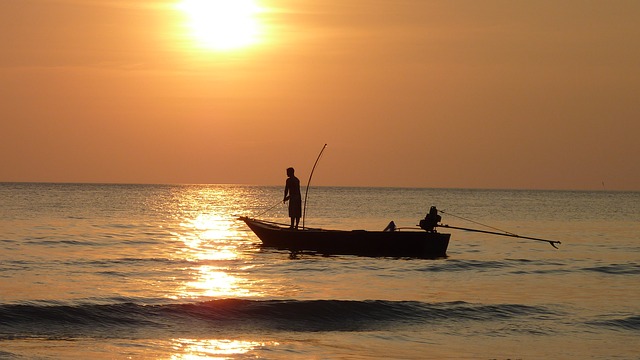 A cool breeze came through the reservoir. I was slowly walking towards the fishing couple sitting in front of their little hut, mending a net. It was a small fishing community adjacent to the banks of “Rajangana” reservoir- a beautiful man-made reservoir- in north central Sri Lanka. A wooden fishing boat swayed near the water’s edge. I was out for an article about the inland fisheries.

The fisherman and his wife became bit startled to see me suddenly appearing with a notebook and a camera. “ I am from a newspaper, doing an article,” I said to them. Smiles appeared on their weathered faces and in no time we were friends. From my many encounters with rural fishermen, I can assure that they are not shy to speak their mind. Soon came a glass of hot herbal tea and we began chatting.

“Ariyadasa” the fisherman ( I still remember his name), lay the nets at night and again go to the waters to get them back during the morning. The handful of fish get caught on his net, he sells to the middlemen and comes home with the nets. Now he and his wife slowly mend the fishing nets- their most important tool of the trade.

“ Theppilli” the native word for fish “Tilapia mossambica” is the lifeblood of this fishing family. Thousands of fishermen in rural Sri Lanka make their living because of this fishery surrounding the inland reservoirs of Sri Lanka. So the story of the lives of this fishermen is the tale of Tilapia. It can not be separated. Man and the natural resource.. This is the ultimate combination throughout the human history.

Now the Science of Tilapia mossambica… This fish is a favorite culture fish in the third world. The fish is a fast breeder and easy to culture in waterbodies. Ancient kings in Sri Lanka had made those reservoirs to facilitate the agriculture. It was to these reservoirs scientist have introduced this fish species to boost fish production. Ariyadasa, our poor fisherman, who everyday struggled for mare survival told me his story that day.. End of his story I questioned both science and politics…

Sri Lanka is a resource-rich tropical island blessed with abundant waterways. Thousands of years, in mighty kings’ era, this had been a country of a strong subsistence economy depended on agriculture.  There was no western science during those days. Traditional technologies used, which went very well with the life and nature. The struggle of science and politics, unfortunately, couldn’t get rid of poverty of this beautiful country in this space age!

Though science introduced Tilapia to this reservoir (which is not a native fish) to boost fish production, no strong policies were there to sustain the industry and elevate poverty of these fishermen! Measuring from head to tail of Tilapia and analyzing gut contents science can come to conclusions. A politician can release the fingerlings(small fish) of Tilapia to a reservoir, during an election campaign.  In countries like Sri Lanka, policies and government backing changes with changing governments. So the “Tale of Tilapia” became a fairy tale!

Science is not a magic bullet. It needs good handling… A good political backing.. Honest administration.. (Uncorrupted governments.. etc) ..Generations of scientist tried to introduce the technology to third world developing nations. When can science ease the poverty of the people like traditional fishermen on a small island in the Indian ocean? Are we practicing the right science or we are after an illusion? Do we know enough about head or tail of Tilapia mossambica! This was the tale of Tilapia, which I wrote to a science magazine back then.